Sylvia Bate-Swall: A San Diego “Woman on the Water”

When I met Sylvia this summer while volunteering with Challenged Sailors San Diego I could see right away that she was a force of nature . . . but I had no idea what a valiant woman on the water she is and how she changes lives by sharing the sea. Breaking barriers for women sailors, as well as disabled sailors, may not have been her goal but it will clearly be her legacy.

When we sat down at the Women’s Museum for this interview, Sylvia, who stands tall at about 5’ 7, was wearing a white jacket with the Challenged Sailors logo with its slogan “Let’s go Sailing!” Her blue stain glass sailboat earrings set off her short natural waved white hair. Her face and hands are tanned and gently weathered from years in the wind and sun.

Her face lights up as she tells me about the magic she feels when on the water and heading out into the ocean – magic that began for her when she was a little girl in Point Loma as the daughter of a boat builder who built her a rowboat and later built her a Penguin Class 16’ sailboat.

A natural sailor, Sylvia never took lessons but learned how to skipper and crew through lots of experience – most of which was here in San Diego. Although she raced when she was young (the only girl on the boats she raced), she preferred cruising to racing to avoid screaming male skippers who used very “salty” language and occasionally threw things when crewmembers didn’t make the boat go fast enough to win.

So cruising she did . . .one of her most thrilling trips was aboard the 90 foot schooner, Bill of Rights, which she and 11 other crew members sailed from Norfolk, Virginia through the Panama Canal to Costa Rica – delivering it for the Los Angeles Maritime Museum. It took all twelve crewmembers to hoist so many sails without any winches on a journey that began on a cold, foul-weather gear kind of day on Christmas, 1999. She describes how there was ice on the deck and the only heat came from the propane stove. But once under sail and heading east, they caught the consistent Gulf Stream trade winds of the Caribbean, and thereafter it was mostly smooth sailing for the rest of the three-month trip delivering the Bill of Rights to its temporary home.

When asked about being a woman in what has traditionally been a man’s sailing world, Sylvia reminisces about how annoyed she was that she couldn’t become a member of any local yacht club until the late 1970’s. Prior to this time, only her husband could be the “member” as she tagged along as his guest. However, after about 40 years of waiting, the rules changed and she and her husband, Mike, agreed that she would be the “member” and he would be the one to tag along as her guest!

Another memory, Sylvia, like other women would like to forget, is the era when private clubs, in addition to yacht clubs, would not allow women to enter what was considered the “inner sanctum” – causing the men to get the drinks and deliver them to the women waiting in the club’s “open areas”.

Other than these, most of her sailing memories have been good ones. One that we focused on was how she and Challenged Sailors began their adventure.

It was a chance encounter about ten years ago when she just happened to take her stepdaughter’s friend sailing. The friend, Linda, (who was blind) was thrilled having the wind in her sails and thought to introduce Sylvia to the person who at the time was in charge of the Disabled Business Person’s Association – an organization that had access to adapted sailboats for disabled sailors – where Sylvia and husband Mike began to regularly volunteer taking disabled people out to enjoy the freedom of sailing in the San Diego bay. Over time they began to maintain the fleet of eight adapted Martin 16 sailboats spending lots of their own money and lots of their time. Eventually, they formalized the arrangement and created a new non-profit corporation called Challenged Sailors San Diego.

Today Challenged Sailors is located at Harbor Island and every Friday and Saturday at noon you can see volunteers and sailors on Dock D getting ready to sail out of the harbor and into the bay. The boats are always accompanied by the “chase boat” manned by a Bob, regular volunteer, who keeps the boats safe by motoring nearby and standing ready to help if any boat finds itself in need. 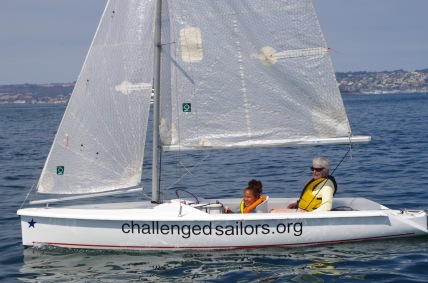 The sailors who participate have a variety of disabilities such as blindness, deafness, MS, paralysis, autism, ALS, Huntington’s disease and PTSD. Sailors are young and old, boys and girls and men and women. One of the most gung-ho sailors is a woman who was blinded by diabetes and who claims that Challenged Sailors changed her life. Devastated when she lost her vision, sailing gave her freedom and confidence to carry on with her life. Likewise, each month a group from Paralyzed Veterans of America, and each summer a group of blind students from Bay Park Elementary School take to the water to experience the exhilaration and freedom that sailing provides.

Sailing is in Sylvia’s genes and has been passed down to her two children, her three grandchildren and even her two great-grand children – one of whom, a five year old girl, crewed on a race last summer with her great grandma in Hawaii winning the race!

As our interview ended, Sylvia said that she wants to encourage others who love the water – both with and without disabilities to join the fun and benefit from the therapeutic and recreational adaptive sailing opportunities for sailors and volunteers alike provided by Challenged Sailors.

For a little girl whose first boat ride was in a small rowboat made by her father, to a woman who has logged thousands of nautical miles at sea on yachts of all types, Sylvia never let her gender get in the way of her passion – a passion that she generously continues to share with those whose lives are set free each time the wind fills their sails.

Anne is a writer and currently writes “Musings of a Boomer Feminist”, her goal is to educate and entertain women on what it was like for the baby boomer generation as we tackled women’s issues in the work place and on the home front. She is also a contributor to The San Diego Free Press, The San Diego Reader and The Uptown News.

Want to write your own post for The Women’s Museum of California? Find out more here