“The world is wide, and I will not waste my life in friction when it could be turned into momentum.” – Frances Willard

An educator and social activists, by 1890 Frances Willard was one of the most well-known women in America (right behind Queen Victoria). 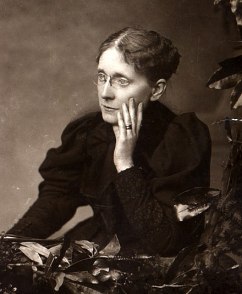 Willard started her professional career as a teacher in 1859 in one room school houses. In 1871 she was appointed the president of the newly founded Evanston college and thus she became the first American woman college president. In 1873, when Evanston merged with Northwestern University to become the Woman’s College of Northwestern University, Willard was named the first Dean of Women at the university.  Willard encouraged her female students to think about their careers after their schooling ended and was a big promoter of young women being able to govern themselves and decided their own trajectory in life.

Willard’s career expanded beyond education. She was a strong advocate for social reform, her most famous cause for reform being temperance. In 1874 Willard participated in the founding convention of the Woman’s Christian Temperance Union and was elected the first corresponding secretary of the WCTU. In 1876, she became head of the WCTU Publications Department, focusing on publishing and building a national audience for the WCTU’s weekly newspaper. While Willard had left the world of education behind to focus on the temperance movement she was still focused on educating the young minds of girls. Her experience as a teacher allowed her to inspire young women to get involved in social activism and gave her the ability to educate WTCU members on how fighting for temperance is connected to suffrage and the education of children. As head of the WCTU publishing department, she published leaflets and books for girls such as Occupations for Women, which listed a wide variety of careers women could pursue after college.

In 1879, she sought and successfully obtained presidency of the National WCTU. Once elected, she held the post until her death in 1898. Willard grew the WCTU to be the largest women’s organization in the eighteen hundreds. She traveled the country and urged women to get involved and do whatever they could, since they couldn’t vote yet, to bring about political legislation in favor of prohibiting alcohol. Ever the educator, she trained women to make speeches, write letters, and distribute petitions in order to accomplish social reform.

While she died young her influence as an activist and teacher lasted into the 20th Century. In 1905, Willard was the first woman included among America’s greatest leaders in Statuary Hall.The Temperance movement that she led for so long finally succeed with the passing of the 18th amendment in 1919 which prohibited alcohol in the United States. 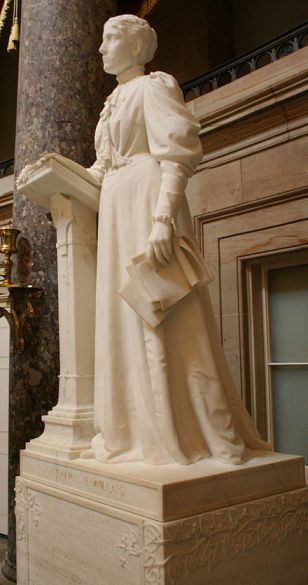