As Laura Mulvey explained in her 1975 “Visual Pleasure and Narrative Cinema,” “In a world ordered by sexual imbalance, pleasure in looking has been split between active/male and passive/female. The determining male gaze projects its phantasy on to the female figure which is styled accordingly” (62). 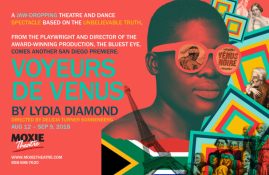 Diamond challenges both her audience and her protagonist Sarah Washington (played in this production with conviction by Cashae Monya) to think about our part in perpetuating the gaze, and by extension, all sorts of colonial attitudes. (We’ll just call it the gaze because, as Kimberle Crenshaw reminds us, these sorts of marginalizing mechanisms are products of intersecting issues of race, class, gender, and more.)

Sarah, an accomplished cultural anthropology professor, has an exciting publishing contract to write a book about Saartije Baartman, a South African Khoikoi woman who was captured and brought to England for, concisely, men to look at because she reportedly had a large bottom. The play is less about the detailed history of this exploitation and more about how we as contemporary, enlightened folk deal with this uncomfortable part of history and how we often continue colonial attitudes, via the gaze and our failure to shift the power dynamics.

An educated black woman, Sarah knows all about marginalization and colonialism. She’s wracked with nightmares as she struggles to ensure that Baartman is no longer exploited, especially through Sarah’s book. Importanly, early in the play, she refuses to include any visuals of Baartman in presentations or in the book, thus elminating the power of the gaze and, she clearly hopes, empowering Baartman and other women. She wonders how complicit we all are, via our complacency, (Diamond’s phrasing) in continuing practices such as the gaze and reinforcing colonial attitudes.

Not surprisingly, Sarah also is struggling with her personal choices in her quest to not give in to colonial attitudes or be the passive woman. She is, after all, married to the tall, Nordic sociology professor James Bradsford. But it’s clear to the audience immediately that they are intellectual equals and deeply in love. The audience seems meant to see a harmonious inter-racial couple. However, as Sarah delves deeper into her quest to give Baartman the respect she deserves, she finds herself questioning her choice to marry a white man and becomes attracted to her black editor James Booker (skillfully played by Cortez Johnson). The audience must consider how much of her personal conflict affects her professional stance.

The point is not infidelity but Sarah’s own turmoil that is a result of our society’s expectations and systemic subjugation of black women. Is she a traitor to her gender and race because of her marriage to Bradsford? The audience likely would say, “Of course not! This is 2018.” But director Delicia Turner Sonnenberg asks us to consider more critically Sarah’s perspective and position by having the actor Justin Lang play both Bradsford and the famed Georges Cuvier, who not only further exploited Baartman but also preserved her genitals “for science.” Lang’s performances as the sympathetic, thoughtful Bradsford and the ruthless but accomplished Cuvier push the audience to contemplate the state of colonial attitudes and power dynamics in the 21st century.

In a further attempt to challenge the audience, dance scenes/dream sequences include female nudity. It would be too easy to point fingers at those who are offended or titillated, but the message is clear: The white male gaze is powerful. How do we usurp? Diamond does it by including scenes with bare breasts in a way that ridicules those who gaze upon them in a way that marginalizes and subjugates.

Audiences should leave the play with more questions than when they arrived. Voyeurs de Venus forces us to ask important questions about our own attitudes, our complicity in perpetuating so many intersecting -isms, and even our best intentions to work for equity and equality.

Suzanne Sanders is a volunteer at the Women’s Museum of California. She is also a lecturer in the Analytical Writing Program at the University of California, San Diego and teaches copyediting at University of California, San Diego Extension. While an English professor at Wilbur Wright College in Chicago, she developed the college’s women’s and gender studies program and curriculum. She facilitated a roundtable discussion on teaching women’s and gender studies at the community college level at the National Women’s Studies Association conference in 2015.